The global supply chain crisis, caused by the COVID- 19 pandemic continues into the year 2022. The Shanghai Containerized Freight Index (SCFI), which recorded 5,000 points at the end of 2021, rose to 5,109.6 points on January 7, breaking a new record high. This is a five-fold increase compared to the early days of the COVID-19 crisis, which was the beginning of the year 2020. The ocean container freight rate in the western part of the United States, which is mainly used by Korean exporters, is $7,994 per FEU, and the freight rate of the easter part is $11,833 per FEU, which is an increase of about $1,000 compared to the beginning of December last year. There is a concern in the logistics industry that the freight rate of Busan-LA port will increase $10,000 per FEU and the freight rate of Busan-New Jersey port will exceed $15,000 due to the resurgence of COVID-19 caused by the Omicron variant around the world and the bottleneck of major import and export ports in the United States, which cannot be resolved in a short time.

The air freight market, which is an alternative means of transportation, is in a similar situation due to the rise of ocean freight rates. In December 2021, the Hong Kong-North American air freight rate of the TAC index, which is an air freight rate index, recorded $12.72 per kg. It has been rising sharply for the fifth consecutive month since it recorded $7.9 in July last year. Also, the stabilization of the air freight rates has become even more challenging as China, the world’s largest aviation market, banned loading cargo in passenger plane cabins or converting them into cargo planes starting this month. The aviation industry cannot afford to increase freighter operations, as it has already maximized the amount of freight transportation.

According to a recent survey called ‘Expected Difficulties in Import/Export Logistics in the Future,’ conducted by the Korea Chamber of Commerce and Industry for 300 Korean export companies, in addition to the sharp rise of logistics costs such as freight rates (38.7%), securing space for ships and aviation (21.0%), shortage of containers (17.7%), and delays in shipping (16.7%) were also found. It truly is a real logistics crisis.

Under this circumstance, it will be very meaningful from the perspective of lessons to be learned to examine the causes of the current logistics crisis in the United States and to find a solution in the future.

According to the recent status of Ports of Los Angeles and Long Beach (LA/LB), which is the largest port in the United States that handles 40% of the import traffic, 102 container ships are waiting to unload, as of January 10, 2022. Also, about 800 people or about 10% of the dockworkers employed in LA/LB port are under home quarantine due to COVID infection or close contact with an infected person. As a result, it takes about 25 days for a container ship to arrive at the port of LA/LB, berth, unload and take out. It is expected that it will take at least several more months for the bottleneck to be resolved. 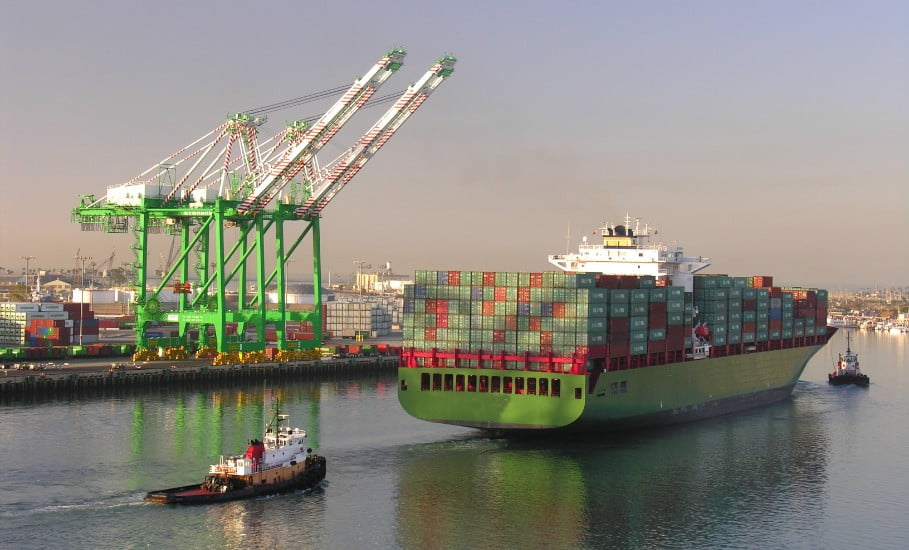 Various opinions are being raised about the cause and solution of the current logistics crisis in the United States. Some believe that the lack of cargo handling capacity at major ports such as LA/LB port and New Jersey Port, which serves as the import/export gateway in the United States, the world’s largest importing country, is the main cause of the bottleneck in the port and argue that the expansion of infrastructure for the port and transportation and logistics facilities in the hinterland should be prioritized. Others argue that the shortage of labor in the port has occurred due to absence and turnover due to COVID, and the bottleneck effect is intensifying as delays in loading and unloading in the port have been aggravated for a long time. They propose solutions such as introducing a 24-hour operating system at the port, imposing fines on long-term undelivered cargo, increasing the wages of dockworkers, and expanding the employment of foreign workers. However, considering that the logistics industry is based on demand derived from the production and management of shippers such as manufacturing, distribution, and trade, there is a limitation to diagnosing the underlying cause of both claims.


Is the U.S. Government’s Economic Stimulus Policy the Root Cause of the Logistics Crisis?

To respond to the economic downturn caused by the COVID-19 pandemic, governments around the world, led by the United States, have promoted economic stimulus policies such as huge economic stimulus funds, unemployment benefits, and payroll protection systems; however, as the quantitative easing of the currency rates were maintained, liquidity expanded in a short period and consumption demand sharply increased, causing a bottleneck in the global supply chain. In other words, the response to the imbalance in which demand exceeds supply in the market was to expand the supply upstream of the supply chain, that is, the demand flow such as market → distribution → manufacturing → parts supply. This led to the so-called ‘Bullwhip Effect’, which amplified the logistics bottleneck in the process. 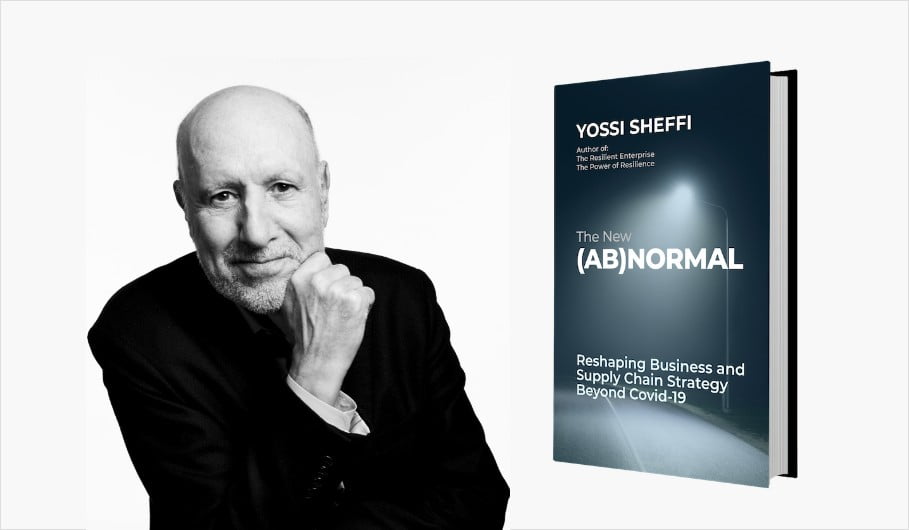 (Source: sheffi mit edu new-abnormal)
Originally, the bullwhip effect was defined as ‘a phenomenon in which information on actual market demand is amplified and distorted as it is transmitted upstream in the supply chain.’ It is the basic theory of SCM that unnecessary production and inventory, resulting from an imbalance of supply and demand, results in inefficiency at the overall system level. It serves as a theoretical background for SCM strategies that have been recently proposed to optimize supply chain management and improve the efficiency of logistics management through the synchronization of supply and demand. 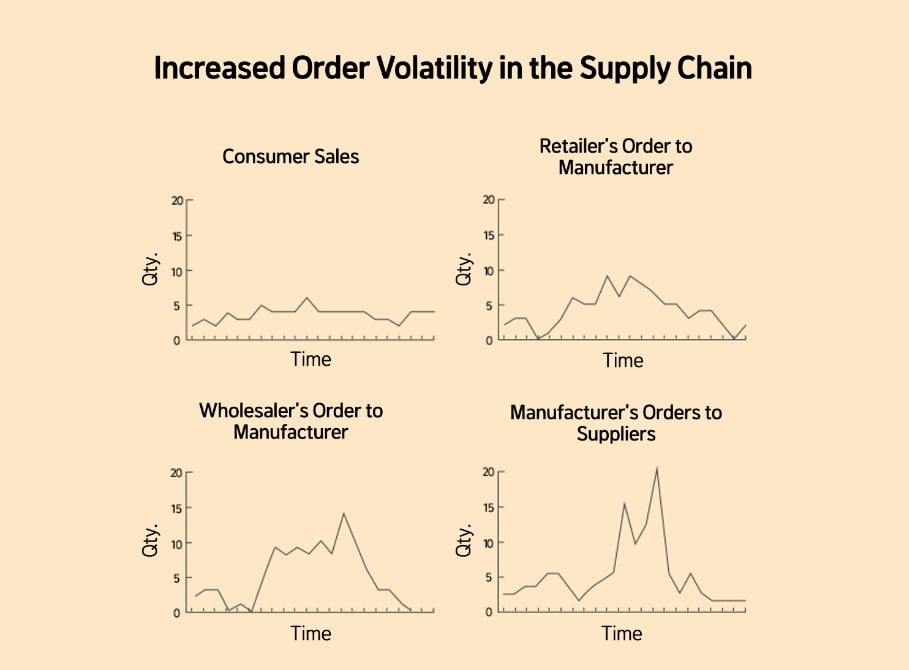 (Source : Hau L. Lee, V. Padmanabhan, Seungjin Whang, “The Bullwhip Effect in Supply Chains”,
MIT Sloan Management Review, Vol. 38, No. 3, Spring 1997)
In fact, to minimize the economic downturn caused by COVID-19, the U.S. government has promoted fiscal expansion policies for large-scale economic stimulus at the executive level after March 2020 in accordance with the ‘America Rescue Plan Act,’ and through the Federal Reserve Board, a monetary policy based on zero interest rates and unlimited quantitative easing was implemented. The government’s active support policy has led to a surge in household consumption since then, with the proportion of U.S. government spending as a percentage of Gross Domestic Product (GDP) reaching an all-time high of 44% in 2020.

According to the ‘SpendingPulse’ report, which analyzes consumer spending patterns released by Mastercard, online and offline retail sales during the special year-end period in the U.S. last year (Jan. 1, 2021 to Dec. 24, 2021) increased by 8.5% year-on-year and 10.7% compared to the same period in 2019, just before the pandemic. This is the highest figure in 17 years. Such a sharp increase in retail demand leads to the efforts of retailers to secure safety stock and manufacturers to purchase raw materials to expand production.

The global supply chain crisis, represented by the logistics crisis in the United States, is continuing. The current logistics crisis due to the butterfly effect of COVID-19 will be normalized soon. What we need to seriously consider at this point is how to respond to crises caused by other butterfly and bullwhip effects that may occur in the near future.

What kind of changes will climate change due to global warming have on the supply chain management and logistics operation? How will the imbalance in resource and energy consumption and the conflict structure between countries progress and affect the global logistics system? How will the existing forms of manufacturing, distribution, and trade change in the future, where currently, overseas direct purchases and reverse direct purchases are rapidly increasing through cross-border electronic commerce? What sort of changes will it bring to the supply chain management and logistics management system? How much impact will automation and intelligence efforts to solve the problem of labor resource shortages have on individuals, businesses, and the national economy?

As a matter of fact, we have experienced similar crises, such as the Korean Financial Crisis in 1997 and the global economic crisis in 2008. At that time, we successfully overcame the difficult crises and provided an opportunity to take one step further. It is a time that requires our wisdom and efforts by learning lessons from past mistakes.
▶ The content is copyrighted by the Author as a work protected by Copyright Law.
▶ The content prohibits secondary processing and commercial use without prior consent.