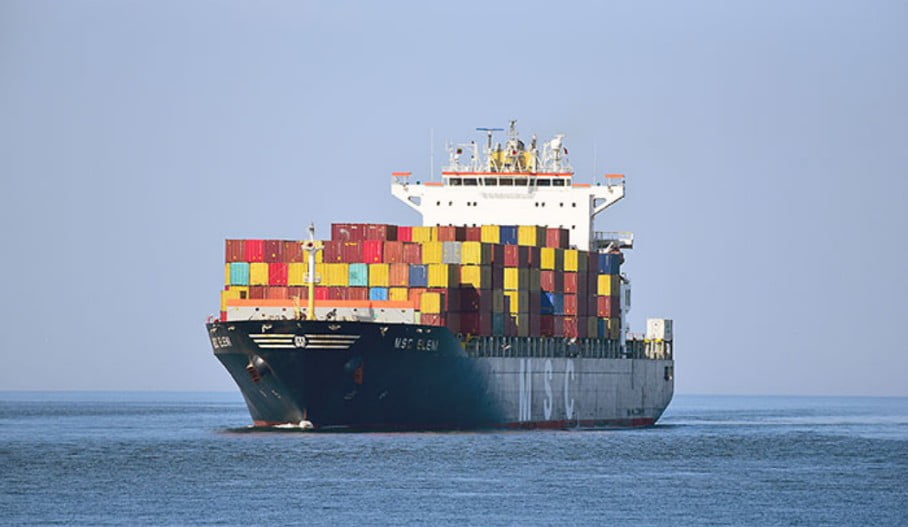 Long-term contract rates in the eastbound trans-Pacific will increase dramatically in 2022 from service contracts that were signed in previous years as retailers and other importers place vessel capacity and service above price, rate benchmarking and analytical firm Xeneta said Monday.

“Ensuring you have secured the capacity you need and carrier commitments in place will, for most shippers, be more valuable than being the one to have secured the lowest rates,” Xeneta said in a statement.

The average long-term rate to the West Coast signed in the past three months is $6,548 per FEU, while the average East Coast rate is $10,100 per FEU as importers “flock to the East Coast to avoid the congestion and risks associated with the West Coast,” said Xeneta. 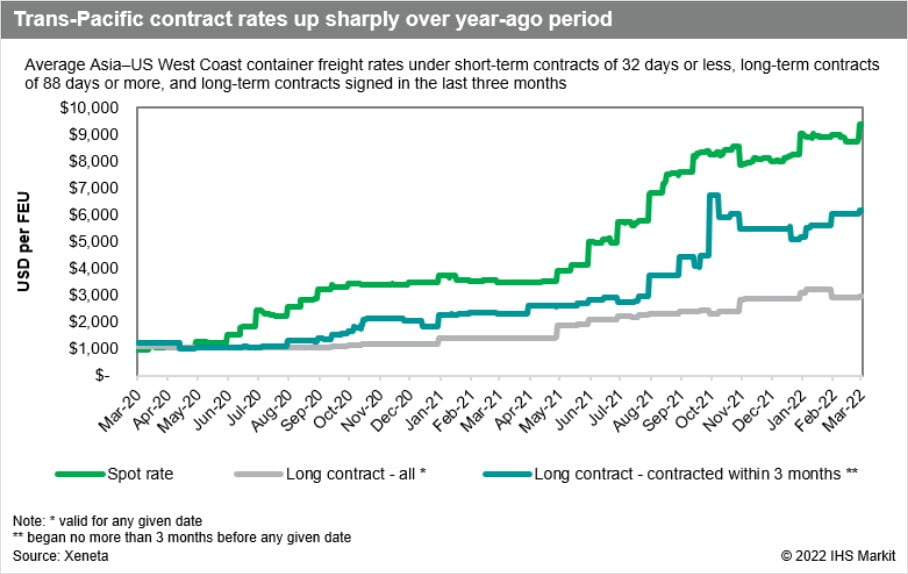 Average rates in long-term contracts of three to 12 months from Asia to the US West Coast signed during the three months from Dec. 1 through February have risen 125 percent year over year (y/y) compared with the year-ago period, and 350 percent from pre-COVID-19, Xeneta said. East Coast contract rates inked since Dec. 1 are up 160 percent y/y and 300 percent from 2019.

Xeneta’s statement comes on the heels of the JOC’s TPM22 Conference in Long Beach last week, where shippers, carriers, non-vessel-operating common carriers (NVOs), and industry analysts said ocean and landside congestion in the United States will keep vessel capacity tight this year, delaying any rate relief for retailers and other importers until 2023 at the earliest.

Carriers last fall began to sign service contracts with their most favored customers at rates reportedly in the range of $6,000 to $8,000 per FEU to the West Coast, which is more than double the rates of about $3,000 per FEU in the 2021–22 contracts, most of which expire on May 1. Now that carriers have turned their attention to mid-size shippers and NVOs over the past two months, contract rates have increased further.

“Trans-Pacific contracts are catching up with spot market rates, said Alan Murphy,” CEO and partner at Sea-Intelligence Maritime Analysis, told TPM22. Ocean, landside congestion sapping capacity Carriers are exerting unprecedented strength in negotiating the 2022–23 contracts owing in part to strong import volumes, but also owing to supply chain bottlenecks at Asian and US ports that are reducing the effective capacity of the vessels they are deploying. Vessel operators are slow steaming from Asia to better align their arrivals at US ports with berth and labor availability, noted Thorsten Meincke, board member, air and ocean freight, at forwarder DB Schenker.

Trans-Pacific carriers last year increased their capacity 31 percent, but owing to vessels being delayed at ports or slow steaming, at various times the effective capacity was reduced by between 8 and 25 percent, according to Meincke. As a result, “rates have exploded,” he said.

US imports from Asia increased 4.5 percent y/y to a record 1.7 million TEU in January after surging 14.4 percent for the full year in 2021, according to PIERS, a JOC.com sister product within IHS Markit. While industry analysts and carrier representatives said import growth this year will slow to more normal single-digit y/y growth, supply chains are so backed up that they will continue to reduce the effective capacity of the vessels deployed in the trans-Pacific. No relief likely until 2023 Lars Jensen, CEO and partner of Vespucci Maritime, said the current international trade bottlenecks will continue to result in capacity shortages until “the end of 2022, if we are lucky,” but more likely into 2023.

US retailers and other importers were counting on a surge of new vessel deliveries scheduled to take place in 2023 and 2024 to stabilize the supply/demand balance in the trans-Pacific. However, industry analysts noted that the IMO’s 2023 decarbonization regulations that target greenhouse gas emissions could significantly impact older, smaller Panamax vessels with less than 5,000 TEU capacity.

Most of the services deployed by new carriers that entered the trans-Pacific last year use Panamax vessels. On their mainline routes, the major alliance carriers operate newer, larger vessels, the vast majority of which are IMO 2023-compliant. But they have also deployed dozens of smaller “extra-loader” vessels to handle the import surge, many of which will not be compliant with the IMO rules.

Carrier representatives indicated the deployment of older vessels in 2022 will begin to diminish. “Extra-loaders are not the answer” to the capacity shortages in the trans-Pacific, said CEO of Ocean Network Express Jeremy Nixon.
· Contact Bill Mongelluzzo at bill.mongelluzzo@ihsmarkit.com and follow him on Twitter : @billmongelluzzo.
List
Latest Contents
Rejection of Unauthorized E-mail Collection