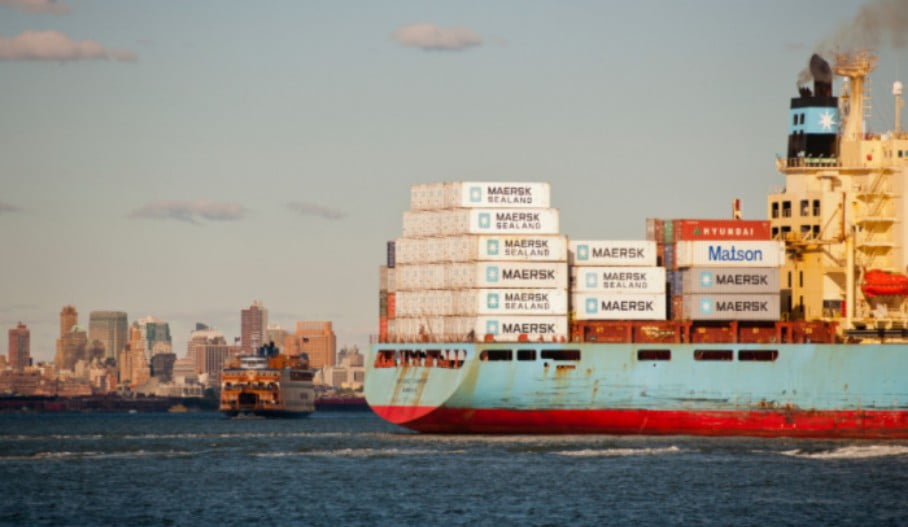 Container shipping disruption tied to the pandemic made glaringly obvious how critical it is for goods to keep moving.
Photo credit: Shutterstock.com.
A relative easing of trans-Pacific spot rates — still roughly three times higher than prior to the COVID-19 pandemic — is spurring some shippers to try to renegotiate their service contracts. Some US importers say they have been successful in signing short-term contracts lasting a month or two at lower rates, but customers seeking to renegotiate pricing for the life of the contract are reportedly meeting with strong pushback from carriers.

The degree to which importers are able to secure lower rates in the coming months hinges on cargo volumes and the strength of the eastbound spot rates in the peak season. Although spot rates, as measured by benchmarking services Drewry, Freightos, and Xeneta, have been moving downward since the Lunar New Year in February, rates are still significantly higher than pre-pandemic levels. 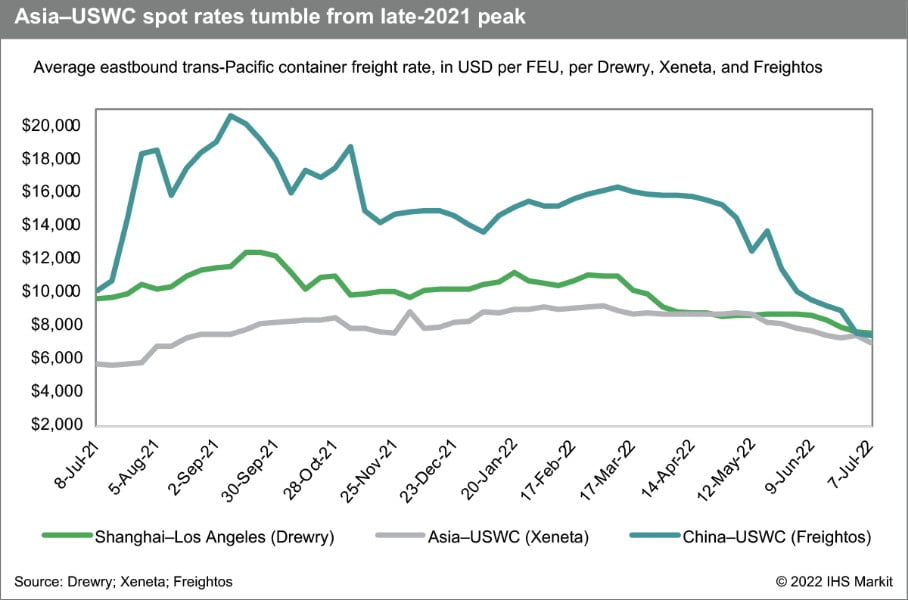 The spot rate from Asia to the West Coast was about $7,000 per FEU as of July 6, down from about $8,500 per FEU in February and roughly $2,000 per FEU prior to the pandemic-induced surge in US imports from Asia, according to Drewry. East Coast rates have been relatively firm, holding above $10,000 per FEU this year.

There is a close correlation between the direction of spot rates in the spring, when annual service contracts are signed, and the pricing agreed to in those contracts. Spot rates were elevated this spring, and mid-size shippers signed service contracts with rates of $8,000 to $10,000 per FEU. With West Coast spot rates now averaging $7,000 per FEU, customers are naturally gravitating toward booking their containers at the lower spot market rate.

“If [contract rates] are 20 to 30 percent above spot rates, clearly you’re not shipping under those contracts,” Michael Braun, director of value engineering and head of Xeneta’s advisory department, told JOC.com last week.

Although the rate of cargo volume growth has weakened over the past few weeks owing to inflation and consumers’ preference for spending discretionary income for services rather than merchandise, Global Port Tracker (GPT), which is published monthly by the National Retail Federation and Hackett Associates, is nevertheless predicting strong imports this peak season.

The July 8 GPT forecasts that imports through November each month will be slightly above or slightly below the same months last year, which was a record year for US imports. Carriers amenable in a soft market 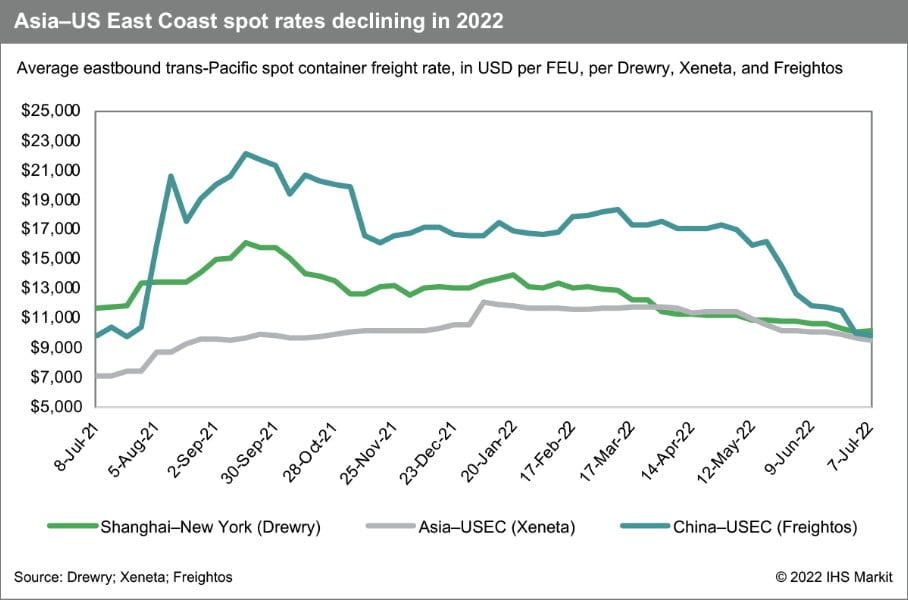 Retailers and industry analysts say carriers do not want to pass up booking opportunities, so they are working with customers to provide immediate rate relief.

“Some carriers have signed contract amendments through July to allow shippers to book their shipments using the lower rates, and count the containers moved against their contracts,” Jon Monroe, who serves as a consultant to non-vessel-operating carriers (NVOs), said in a July 4 newsletter. “Some carriers have simply allowed shippers to use the spot rates and count the volume moved against their contracts.

“What carriers have so far failed to do is renegotiate the contract rates included in the contracts,” he added.

However, a few importers told JOC.com Monday that they have indeed been able to renegotiate their service contract rates for the life of the contract through April 30, 2023.

NVOs, who often find themselves in the middle of this give and take between shippers and carriers, emphasize that carriers make rate decisions based upon their relationships with individual customers on specific trade lanes. For example, a carrier may be quite flexible on rates between major port pairs, such as mainland China to Southern California, where there is excess vessel capacity, but not nearly as flexible on port pairs between Southeast Asia and the East Coast, where capacity remains tight.

A mid-sized retail shipper who asked not to be identified told JOC.com two of four carriers with whom he was negotiating came back two weeks ago with an unsolicited offer to drop its Asia–West Coast freight-all-kind (spot) rates from $9,000 per FEU to $8,500 per FEU. He also expects that the $2,000-per-FEU peak season surcharge in the contract will likely not be implemented.

During the 2021 peak season, carriers regularly levied “premium charges” of $2,000 per FEU or more to ensure containers that were booked on certain voyages would actually be loaded on those vessels. Braun said premium surcharges “are more and more coming to an end.” Front-loading, disruption make peak season tougher to predict Both Braun and the shipper said the coming month between mid-July and mid-August will be the critical period in determining what will happen with spot rates this peak season.

There is still significant uncertainty among carriers, shippers, NVOs, and industry analysts as to the intensity of the upcoming August–November peak shipping season. Braun said a recent survey of Xeneta customers indicated the “heaviest part” of the peak season may have already occurred when retailers fast-forwarded shipments during the spring and early summer to reduce risk posed by supply chain congestion and uncertainty over the outcome of US West Coast longshore labor negotiations.

According to the Xeneta survey, 54 percent of the respondents expected a decrease of 20 percent or more in their shipments for the rest of the year from what they had intended to ship, and 30 percent believe the volume allocations — also known as minimum quantity commitments (MQCs) — in their contracts are too high.

“It certainly feels like we are at the beginning of the end of the container market bull run,” Drewry said in a June 30 advisory. “We always knew that the extreme freight rates were unsustainable.”

But widespread congestion throughout the trans-Pacific supply chain — from factory floors and busy load ports in Asia through major US import gateways on all three coasts and into the US interior — will continue to reduce effective capacity in the trade, keeping spot rates well above pre-pandemic levels.

A Drewry poll published last week found that 48 percent of the respondents believe the current supply chain congestion will continue into the first half of 2023, and 40 percent said it will persist through the second half of next year.
· Contact Bill Mongelluzzo at bill.mongelluzzo@ihsmarkit.com and follow him on Twitter : @billmongelluzzo.
List
Latest Contents
Rejection of Unauthorized E-mail Collection