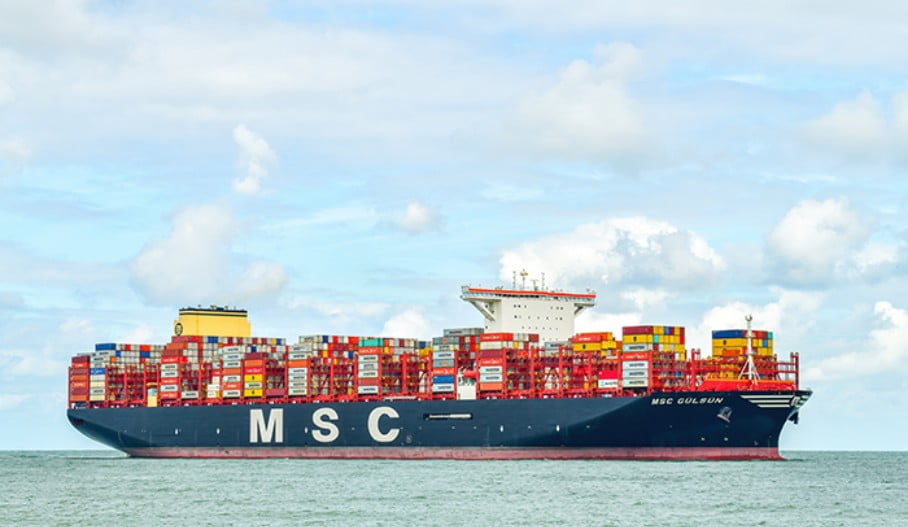 Mediterranean Shipping Co. has increased its already dominant lead in US imports in 2022, growing volumes 18.1 percent to 2.3 million TEU. Photo credit: 365 Focus Photography/Shutterstock.com.
The 2M Alliance handled a larger share of containerized US imports during the first five months of 2022, narrowing the gap between itself and the Ocean Alliance, as volumes continued to surge on top of the record-setting increases seen last year, according to JOC.com’s rankings of the Top 40 Container Carriers by US Imports and Exports.

Inbound shipments carried by 2M Alliance members Mediterranean Shipping Co. and Maersk jumped 12.3 percent year over year to 3.88 million TEU through May — more than double the 5.2 percent growth seen in total US imports during the same period. Imports carried by the Ocean Alliance — CMA CGM/APL, Cosco Shipping/OOCL, and Evergreen Line — grew just 0.2 percent to 3.91 million TEU in the same period.

The 2M Alliance’s growth, driven by an 18.1 percent jump in MSC’s volumes, boosted its combined US import market share to 31.6 percent, up from 29.7 percent in the first five months of 2021; the Ocean Alliance’s share slipped to 31.8 percent from 33.4 percent. Boost for independent lines Independent lines outside the three major vessel-sharing alliances also saw above-average growth in US imports, albeit from a much smaller base. Through May, non-alliance lines carried 1.9 million TEU of US imports, a 21.6 percent year-over-year jump that boosted their total share to 15.7 percent from 13.3 percent.

A 9.7 percent drop in US import volumes among members of THE Alliance — Ocean Network Express, Hapag-Lloyd, HMM, and Yang Ming — dragged their combined share down to 20.1 percent from 23.3 percent in 2021.

A similar pattern emerged in US exports, which tumbled 10.4 percent year over year to just shy of 4.7 million TEU in the first five months of 2022. Combined 2M Alliance export share rose to 28 percent from 27.7 percent the year before and non-alliance share increased to 17.8 percent from 16 percent. Ocean Alliance market share slipped to 30.1 percent from 30.5 percent and THE Alliance share fell to 24.1 percent from 25.9 percent.

Rankings compiled by Marcin Lejk, data analyst. JOC Top 40 Container Carriers by US Imports The JOC Top 40 Container Carriers in US import trades carried 98.9 percent of the nearly 12.3 million TEU in total containerized US import volumes during the first five months of 2022, an increase of 5.2 percent year over year and 30.8 percent from 2018. The top 5 carriers accounted for 64 percent of US imports (7.8 million TEU) through May, up 4 percent from the same 2021 period and 32.8 percent from 2018.

*A.P. Møller-Maersk includes Maersk Line, Sealand, Safmarine, and Hamburg Süd.Source: IHS Markit
JOC Top 40 Container Carriers by US Exports The JOC Top 40 Container Carriers in US export trades carried 99.9 percent of the nearly 4.7 million TEU in total containerized US export volumes in the first five months of 2022, a volume decrease of 10.4 percent year over year and 13.6 percent from 2018. The top 5 carriers accounted for 62.2 percent of US exports (2.9 million TEU) through May, down 9.2 percent from the same 2021 period and 11.1 percent from 2018.